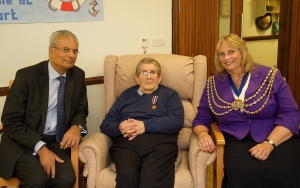 C.P.O William J Bradford, a resident at Acorn Court has just been awarded the ‘Arctic Star Medal’, a medal that has only been awarded to approximately 200 people in the UK, and the home celebrated with a very special guest.

The Mayor, Councillor Dr. Lynne Hack, BSC, PHD, attended the afternoon event to present William Bradford with his medal during the celebrations on 17 September at the home. The afternoon was a fun occasion with afternoon tea and music for guests to enjoy. William’s family attended as well as Carebase’s Chairman, Alnur Dhanani.

The Arctic Star Medal is awarded for services during WWII, for any length of service above the Arctic Circle by members of the British Armed Forces and the Merchant Navy. The Arctic Star is a retrospective award, coming nearly seventy years after the end of World War II, being announced in late 2012. The Arctic Star was formally approved by The Queen and began production in early 2013.

Alnur Dhanani, Chairman at Carebase, said: “We had a wonderful afternoon celebrating William’s extraordinary achievement and ensuring it will be a moment he doesn’t forget. He is a very special man and a much loved resident and we were all delighted to be able to spend such a special moment with him.”