The card features individual photos of residents with a message in the centre, which reads: A very happy 95th birthday from all of us your Majesty.

Home manager, Jacky Fitzpatrick said: “Our residents thought it was such a shame that her Majesty can’t celebrate her official birthday with the full royal pomp of Trooping the Colour for the second year in a row.  So, they have all have ‘trooped’ out for her instead!”

The making of the card had one resident, Shirley Powell (83) reminiscing, “I remember the Queen’s Coronation in 1953. I celebrated with a street party.  The street was decorated in Union Jack flags with music, food, and lots of happy people dancing and singing.  Definitely a very happy time”.

Another resident Monica (85) said: “She is such a good Queen and has served her country with pride. She is so highly respected and someone to look up to with admiration.”

Jacky adds: “Residents really got behind this project with everyone reminiscing and sharing their memories of the Queen.  And they are so excited to be able to send the Queen their good wishes ‘in person’, as a lasting memento.’ 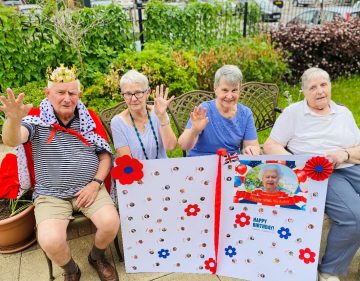