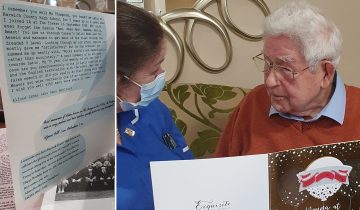 John has lived a full and remarkable life.  During the war he flew with the Mosquito squadron and has travelled all over the world.  Many of his ex-students remark in their messages how they liked to hear him reminisce about his life.

One contributor, David said: “You managed to turn what I thought would be quite a dry subject into something quite exciting – with the help of Virgil I seem to remember.  I wish we had known more about your adventures. They certainly would have made a gripping epic poem to rival the Aeneid!”

Alfred said: “My 70-year-old memory of you was once I saw you simultaneously write Latin with one hand and the English translation with the other!”

Another, Kay said: His lessons in Latin sowed the seeds of my lifelong love of languages, leading to studying some 10 different languages as result.”

Married to his late wife Joan for more than 70 years, John moved to Brooklands in 2015 to be nearer to his two sons, Roger and David and his five grandchildren and two great-grandchildren.

Home manager Julia Chapman-Wright said: “It was such a lovely thing for his former pupils to have done for him.  There were seventeen messages for him in the card – with many more coming in since then. They have stimulated such happy memories”.

We laid on a special celebration, sharing in his reminisces of his time as a teacher and looking at the old school photographs he was sent.  A birthday lunch was safely enjoyed with his son David and wife Jackie and later John took part in a Zoom call with other family members, including his other son Roger, wife Christine and his grandchildren.

John’s day of celebrations was rounded off when the Brooklands team joined together to sing ‘Happy Birthday’ and present him with a literary-themed birthday cake that he shared with his fellow residents.