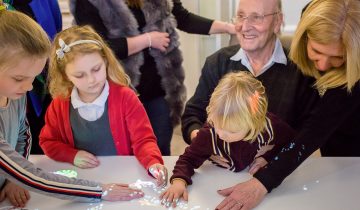 It consists of a projector hung from the ceiling that throws interactive, colourful, moving light games on to a table below that people can interact and play with. The light games encourage players to reach out towards them and the lights subsequently respond to their hand and arm movements, allowing residents to play with light.

The games can also inspire people living with dementia to play and interact with their grandchildren with whom they might otherwise be unable to communicate.

Lee Greaves, the granddaughter of resident John Lewis, said: “It was such a lovely afternoon. The Tovertafel table is stimulating and fun for residents and children. I will enjoy spending time playing on this when I visit my granddad with his great-grandchild Max.”

Nicola Coveney, MD of Ashbrook Court, says: “We’ve been trialing this with our residents for a couple of weeks and it is quite astonishing the impact it is having.  Our residents love it and it brings them together in a way no other activity can.  Some of our residents who decline to be involved in other activities are really enjoying the Magic Table.”